Visual Arts System for Archiving and Retrieval of Images

The VASARI project developed a colorimetric scanner system for direct digital imaging of paintings. It provides higher colour accuracy than conventional film and high resolution, so it can be used to replace film photography. Although the project was funded between 1989-92 technical development has continued since then, including improvements in lighting, software, calibration and colour targets.

Here is an early picture of the VASARI scanner in the National Gallery in London. 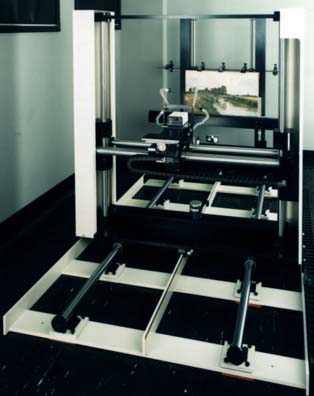 The scanner moves a CCD camera to capture areas which are later "mosaiced" together into a higher resolution image, which is calibrated to CIE Lab values by using images of test charts. The whole scanner can be moved back to allow paintings to be installed. The camera can move slightly forwards/backwards to allow automatic focusing (and hence keep the resolution the same).

The original scanner in the National Gallery is used to produce images with 20 pixels per millimeter of paintings from seven colour bands spanning the visible spectrum. These images are so large (around 1GByte each) they required powerful VIPS image processing software and have been stored on optical disks, CDr and now RAID systems. They are used for publishing, scientific analysis and conservation. This includes studies of surface texture and colour change.

A second scanner was built in the Doerner Intitute in Munich which is also used for infra-red imaging. The MUSA project produced a third scanner in the Uffizi Gallery in Florence.

The London and Florence scanner mechanics were built by Time and Precision, Basingstoke UK. They had to be strong enough to stay straight and consistent as the camera moved.